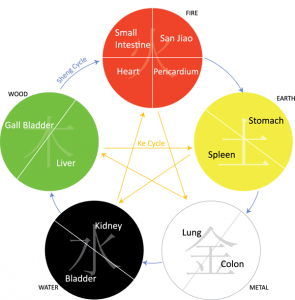 Traditional Chinese Medicine (TCM) is based upon the premise of balance between the body’s core organs and the structure (Yin) and function (Yang) within each organ. The relationship between these organs and the Yin/Yang within each organ is not completely understood, but scientific evidence has come to support many of the ancillary assertions of TCM such as the direct impact that specific naturally occurring compounds have on the regulation of the organ’s activities.

These discoveries are part of the growing evidence supporting the connection between organs in TCM. When treating chronic lung conditions, constant consideration must be given to the lung’s structure and function as well as the impact from other organs such as the heart, kidneys, spleen, and stomach (Refer to Figure A).

To maintain a healthy lung structure, the lungs have the ability to remove unhealthy cells and replace them with newly regenerated healthy cells (Nagaya and Ohnishi).

In lung disease patients, the most common deficiency is structural or Yin related. For example, in COPD patients, the levels of histone deacetylase (HDAC2) and macrophage elastase (MMP-12) are greatly distorted (Barnes) (Lagente, Delaval and Planquois).

HDAC2 suppresses inflammatory gene expression in the peripheral lungs and in alveolar macrophages (Barnes). Decreased levels of activity of HDAC2 in chronic lung disease patients amplifies the inflammatory response. MMP-12 is involved in tissue remodeling and is able to degrade extracellular matrix components such as elastin (Nenan, Boichot and Lagente). In pulmonary fibrosis and COPD patients, the macrophage elastase enzymes are produced at greater quantities causing excessive degradation of lung tissue (Lagente, Delaval and Planquois).

The distorted level and activity of HDAC2 and MMP-12 genes are related to Yin deficiency and Yang flare up in the lungs. Treatments for chronic lung conditions manipulate the levels of these enzymes and provide building blocks by balancing the Yin and Yang in the lungs.

Alpha-1 Antitrypsin (AAT) Deficiency, a rare, but well-researched cause of COPD, is a hereditary disorder characterized by low levels of AAT which is created by the liver but functions as a protease inhibitor in the lungs (Stoller and Aboussouan). AAT Deficiency is a genetic disorder that affects the liver and exposes the lungs to infection by rapidly growing mycobacteria (RGM) which causes chronic lung diseases. This is considered a Liver Yin or structural deficiency and reflects the TCM relationship between the lungs and the liver (Refer to Figure A). These two organs have an “insulting” relationship: any perceived imbalance in the liver will be reflected in the lungs.

In TCM, the stomach directly influences the lungs (refer to figure A). Because of the shared entrance of the trachea and esophagus, the backflow of stomach acids (HCL) can flow into the lungs. Acid Reflux/GERD is known as one of the most common causes of chronic cough, an exacerbating factor for COPD (Kim, Lee and Kim), and also the main cause of the development of IPF (Fahim, Crooks and Hart). As the immune system tries to repair the lung tissue damage, fibrotic tissue and scars can form in the lungs.

The ability to digest and absorb nutrients is another important role of the stomach for the lungs. The lungs are extremely sensitive organs. They are susceptible to injury and malnutrition and require extremely elastic tissue and sufficient lubrication to function. This is rooted in two types of proteins: elastin (structure) and glycoprotein (mucus). These proteins require basic amino acids to be created. Acid Reflux/GERD compromises the stomach’s ability to create basic amino acids. Current  allopathic approaches further compromise stomach acids with acid blockers in an attempt to stop the symptoms of acid reflux and ignore the important role of protein digestion. As a result, this prevents the reversal of many chronic lung conditions (Kilduff, Counter and Thomas).

Congestive Heart Failure (CHF) is a more complex application of TCM than Acid Reflux/GERD. Lung diseases decrease the amount of oxygen in the blood stream, which starves the heart of oxygen and overworks the heart in an attempt to oxygenate the blood, resulting in CHF. In accordance to TCM, the heart is related to the lungs, intestines, stomach, and spleen (Refer to Figure A). This can also be seen by the circulatory network’s main arteries going directly to these organs. However, TCM also dictates that by treating the heart there may be an excessive load on the lungs, such as inflammation and dynamic lung hyperinflation (DLH) (Visca, Marina, and Chetta). The spleen or lymphatic system is extremely important because of its role in controlling inflammation and lymph node contractions. Strengthening the spleen can improve the circulation within the circulatory and lymphatic system, decrease inflammation, and improve the function of both the heart and lungs.

Current allopathic approaches to medicine try to directly address the CHF when treating chronic lung diseases and do not consider the supportive function of the spleen and lymphatic system.

We also employ treatment solutions to treat the associated complications such as liver deficiency, acid reflux, poor lymphatic circulation, and heart conditions. This is necessary to further support the restoration of the lung’s structure and function and repair lung damage.

Below are only some of the selected practitioners. If you do not see a practitioner located near you, please fill out the form to the right to be connected with a practitioner in your area.

Submit your Request for a Free
Phone Consultation

* These fields are required.

By clicking on "Submit" button, you agree to our Terms and Privacy Policy.
If you see an error message after submitting the form, please upgrade your browser to the latest version or use the latest Google Chrome to submit the form again.

Wei Institute Natural Care of Chronic Lung Diseases. Powered by the Wei Institute.
Get in Touch.